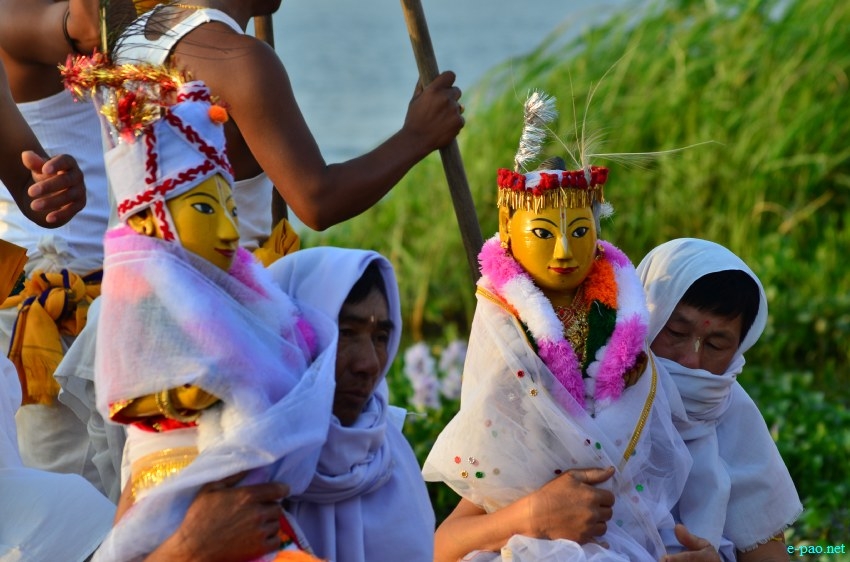 Once, Ibudhou Kha Khende and Chingu Achouba set out for sightseeing riding on their horses at a place where the name itself is beautiful, where the melody tune of Tamna(a bird) could be heard and where the gentle wind blows, called Houbi hill.

Looking towards north Lord Ibudhou Chingu exclaimed the magnificently beautiful nature of the Loktak Lake which reflects like a golden mirror beautifying the hill which is all surrounded by the lake. Lord Ibudhou Kha Khende replied to the above remark, 'Let's set out to that hill and settle there. Let's cut down two huge trees and build our own boats and perform a boat race.

Also the one who sets his foot first on the glorious hill will bear the crown.' The Lords happily agreed to the above laid condition and made a promising remark on a stone that lies at the Houbi hill. Lord Chingu Achouba and Lord Kha Khende decided that Lord Pakhangba, Lord Wangbren and Lord Sanamahi will flag off the boat race. The three Lords agreed to the proposal and commenced the boat race. Lord Chingu Achouba and Lord Kha Khende started the boat race from Houbi hill.

The Goddess called out to Lord Kha Khende and asked the Lord where he was heading. She also asked the Lord to have fruits with her and wear flowers on her ears. The Lord Kha Khende replied to her that they shall have fruits together at some other day, he has been rowing his boat from the Houbi hill contesting against his fellow companion Lord Chingu Achouba and if he spent time with the Goddess delaying the race he might lose the race and also said not to feel bad and he continued rowing his boat.

As Lord Kha Khende continued rowing he reached Ithai, the place where all the birds enjoy joyously, where no viewers can stop glancing at its beautiful sight, the place especially made by the creator of all. The Goddess of Ithai Lairembi asked where the Lord was heading, if he could spare some moments with her she could guide him with a shorter path to win the boat race.

The Lord showed no interest to the proposal as he could think of just winning the race from his companion and could not spare time other than rowing his boat and the Lord replied to the Goddess Ithai Lairembi stating that he would find a day to be together with her to have fruits and wear her flowers, he was competing his companion Lord Chingu Achouba on a boat race from Houbi Hill and the Lord Chingu Achuoba was little behind him and he further said he has to reach the destination and replying thus continued to row his boat trailing the wave of the water round the outlet of the Khodrak river.

At the other side, Lord Chingu Achouba reached the place of the Goddess Tampha Lairembi and she asked the Lord to rest for a while and have fruits with her, wear her flowers as his companion Lord Kha Khende had already gone three turns of the river ahead of him. Lord Chingu Achouba replied that he would like to continue racing to reach before Lord Kha Khende and said to her that they will have fruits together some other day and not to feel upset.

She further said that his companion Lord Kha Khende had gone to a long route but for the Lord she could guide him to the shorter route to win the race. Giving a thought to what the Goddess had said Lord Chingu Achouba agreed to the proposal, he pulled up his boat, had fruits together and wore her flowers. Later, the Lord asked the Goddess to guide him to the shorter path.

The Goddess replied that the shorter route was an outlet of the river which was especially created by her for the boat race and the name of the outlet was Ungamen. She further said the Lord must take the boat towards north Koubru and will come across a hill which was ruled by a person with the name of Nongpok Shelloi Apamba Chingmeirakpa and the destination of the Lord would be towards the north of the hill. The Lord bid goodbye to the Goddess of Ithai Lairembi.

As Lord Chingu Achouba rowed on his boat he reached Chingmeirakpa and met Langon Chaoba Hao who asked the Lord for a lift in his boat. The place was called Haogram Hiran for giving a lift to the Hao (tribe). The Lord came across a mother who was fishing with a net (known as Een) at Shagram. The Lord asked the mother to lift up her fishing net for the Lord to pass his boat and the mother lifted up her fishing net so that the Lord could row his boat. The place was named as Eenjingkhongnung. As the Lord continued rowing his boat he came through Laikotlen outlet and reached Thanga Salam where he landed his boat under the Kekru tree and errected a pillar for success.

Lord Kha Khende continued rowing his boat and came across Thanga River which was ahead of Hiyangtek, Arong Lairembi and Pakhang Kolu. The Lord became thirsty and hungry as he had been rowing the boat continuously. Thinking that Lord Chingu Achouba was behind him, the Lord had his food. While having lunch the Lord left out his water drinking vessel and the place was known as Khujairel.

The Lord came ahead of Khangadong Khuningtek and when he reached Fakchao Shanlan the Lord saw a pillar at Loibi Hill where the two Lords had promised to reach. The Lord became curious to know if the Lord Chingu Achouba has already reached before him and if that was the case he decided to go back to Chairel and the Lord took a u turn.

The place where the Lord took a u turn was called Leingang. But after giving a second thought the Lord wanted to know if the pillar was erected by Lord Chingu Achouba and took a u turn again and came through Mukap Khongnung and landed his boat at Lairok, which was located at Thanga Heisnam. Till now the place where Lord landed his boat is preserved as Lord Kha Khende's fortress also known as Chairellakpagi Khubham.

Lord Chingu Achouba reminded the Lord that they had promised to settle together and whoever came first would wear the crown of kingship but Lord Kha Khende must not get worried that he would like to conquer the southern part of the hill and the remaining northern phase of the hill should be ruled by Lord Kha Khende. 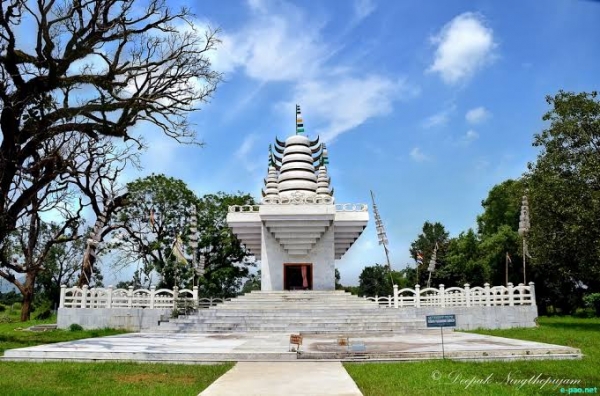 Holy/Sacred places of Kangla Kangla' is regarded as the holiest place for the meeteis. It is a centre of pilgrimage for all the Meteis who are residing in Manipur, Assam, Bengal, Uttar Pradesh, Bangladesh, Myanmar, etc. It is believed that Lord Learn More... 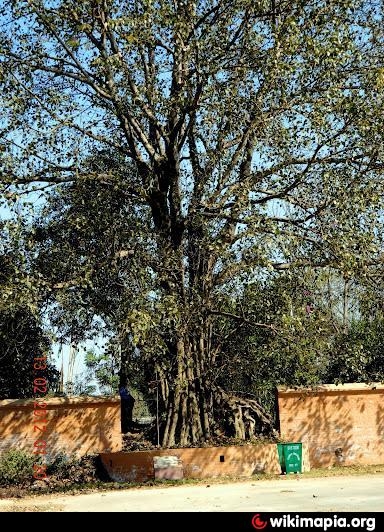 Nunggoibi At this sacred place (known as Nunggoibi), the heads of slain enemies were buried with rites known as 'Huiyen Lallu Chanba' when the Kings returned victorious from battles. In 1891, five British officers including Mr. Quinton, the Learn More... 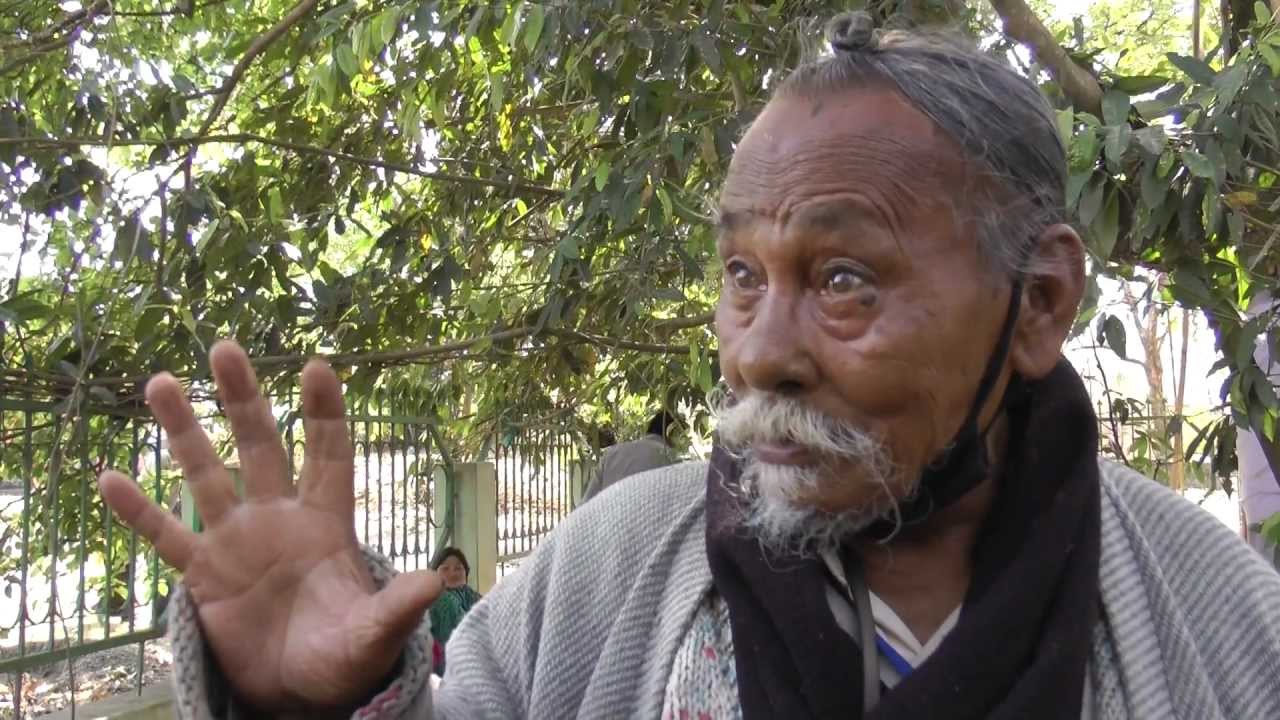 invites_you_in: "Manipur, a tale in seven facts". SINOPSE: Fact 7: And the most unbelievable fact is Sharmila, also known as the Iron Lady of Manipur. She is...